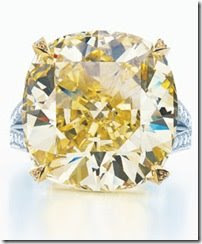 Of all the pieces one might find inside that famous blue box, this 25.27-carat novo yellow diamond ring set in platinum and yellow gold is priciest. Its beauty and its cost make soon-to-be-engaged girls swoon, and their beaus shudder. Can’t make it to the New York City location? Tiffany’s efficient online catalog makes ordering from home easy.

Posted by Wasim Hussain at 11:32 PM No comments: 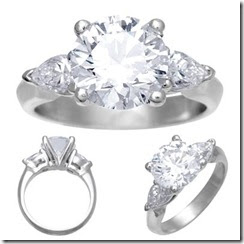 Engagement rings are traditionally known as a symbol of love and proposing. When a man asks a woman for her hand in marriage and in life, this ring is offered. Tradtionally, any ring is usable because the ring itself is a continuous loop symbolizing eternity. But as victims of society, now every man is pressured to use the most expensive piece he can afford, typically a diamond ring. The general rule of thumb is two to three month’s salary to show his dedication and sincerity.

Diamond rings became a tradition when the first one was given by Archduke Maximilian of Austria to Mary of Burgundy in 1477. Now it’s become a widely practiced ritual by nearly every culture in the world. More than 250 tons of earth is mined before a single 1 carat gem quality diamond is uncovered. The best quality diamonds are usually set into platinum bands for people who perfer the best of the best.

Posted by Wasim Hussain at 11:31 PM No comments: 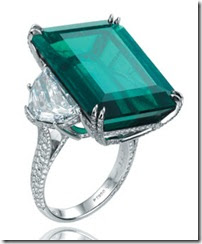 Luxury watch and jewelry manufacturer Chopard’s collection includes many high-priced pieces. But this bold cocktail ring–with half-moon diamond shoulders holding up a 33.02-carat solitaire emerald on a pave-set diamond and platinum band–outshines its rivals.
Posted by Wasim Hussain at 11:30 PM No comments:

Heart of the Kingdom Ruby 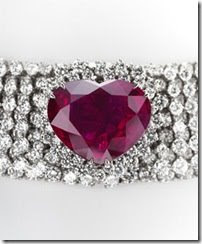 This 40.63-carat, heart-shaped Burma ruby, mounted on a 155-carat diamond necklace, claims top spot in the British jeweler’s collection. Got a débutante in your family? The diamond necklace can be transformed into a tiara. The stone is accompanied by two independent Swiss laboratory reports that verify its rarity.

Posted by Wasim Hussain at 11:28 PM No comments: 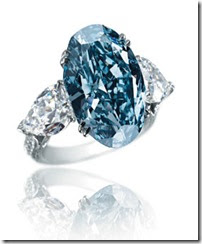 Blue diamonds are among the rarest of naturally colored gems. That’s why this oval-shaped diamond ring, with triangular-shaped diamond shoulders and a pave-set diamond band in 18-carat white gold, will set you back about $1.7 million per carat. A pricey and unique alternative to the typical engagement

Posted by Wasim Hussain at 11:27 PM No comments:

Wasim Hussain
I am the Best...